The follow-up committee for the project carried out an inspection tour at the site on January 27, 2015.

The Bepanda Handicap Multipurpose Centre, which will host the 2015 CECIFOOT Games (football for visually impaired) is nearing completion. The follow-up committee for the project, which has the Government Delegate to the Douala City Council, Dr. Fritz Ntone Ntone, as President, was on the site on January 27, 2015, for inspection. 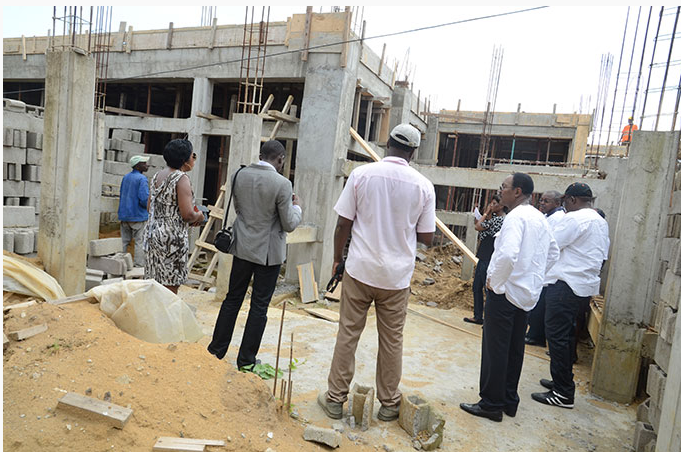 After a thorough guided tour by Architect Philemon Epee, the Committee President qualified the work as satisfactory. “I am impressed with the progress of work. Physical realisation of the main building is about 90 per cent. All the walls have been erected right up to the second floor. Some finishing touches will be carried out in the days ahead,” the President analysed. He added that though the execution level was satisfactory, more efforts had to be made in order to complete the centre before the start of the CECIFOOT Games in October 2015. He urged people of goodwill and organisations to contribute financially or materially to the completion of the centre, since funding was a major problem.

The project, which is a tripartite venture between the Ministry of Social Affairs, the Douala City Council and Douala Dream, comprises four main buildings - workshops, capacity-building section, administrative block and a section for collective activities like sports. The social centre, with main objective to ensure social and professional integration of vulnerable persons, will also comprise a pharmacy, library, archives and an ICT laboratory. The FCFA 750 million project, upon completion, will train disabled persons of all sorts in domains like catering, carpentry and dress-making.

Since the Centre will offer professional training for some enterprises that makeup GICAM, the Littoral Regional Delegate for Social Affairs, Rose Marie Goueth, affirmed that it will promote self-employment and financial autonomy. According to the Project Architect, the Multipurpose Centre will be the first of its kind in Sub-Saharan Africa because it is constructed in line with the exigencies of the International Handicap Norms. The complex, by Cameroon Dream, will be handed over to the government upon completion.