Equipment for the functioning of a port are already available in Kribi ahead of effective takeoff. 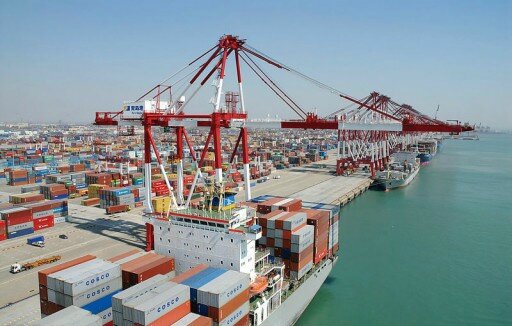 The Kribi Deep Seaport in Mboro, some 35 km from the headquarters of the Ocean Division of the South Region, is technically fit for use. The constructor, China Harbour Engineering Company (CHEC) is done with all works on the edifice and the imposing infrastructure is now ready to receive vessels of all sizes. All that is needed to make the port functional are in Kribi.

The Kribi Deep Seaport consists of two terminals: A 265 m long multipurpose terminal with a capacity of 1.5 million tonnes and a 350 m long container terminal with a capacity of 350,000 EVP. All the equipment that can allow ships to anchor in the two terminals are already available. There are two container cranes to handle containerized goods. There are also portal cranes to handle non-containerized goods. According to Peter Munongo Aboko, Civil Engineer at the Coordination Unit of the Port’s Steering Committee, one of the portal cranes can handle both containerized and non-containerized goods. There are spreaders to handle containers and make the port more efficient. “It means that we can have the three of them work at the same time on the same ship. According to the design of the port, the multipurpose terminal is to harbour vessels with lengths of 200 m while the container terminal is designed to handle vessels of 293 m long. Two of such ships can anchor at the same time and there is a security gap between,” he said. Experts say the port can now receive simultaneously three ships of 200 m each.

There are two tug boats with 2,400 horse power for each. The two tug boats christened “Roi Mayesse” and “Roi Madola” from Shantou, China are there either to pull or push the vessels given that large vessels will be anchoring in Kribi. This is to avoid accidents. In the same vein, the constructor has put in place a protection dyke to avoid water currents that can disturb ships from anchoring or taking off. The protection dyke therefore calms the waters.

The edifice is built in such a way that once it goes operational, only people with authorized badges can get access into the port. In the north entrance of the port, there is security gate for the exit of containers as modern weighing centres have been built to check vehicles. Surveillance offices are already equipped with computers and ready for use and surveillance cameras are also spread across the port.  Trainings are ongoing in the port’s site to sharpen the skills of those who are going to work in the port. According to the deputy Coordinator of the Operational Unit of the Port’s Steering Committee, Hand Bahiol Magloire, “This is part of transfer that the operational unit will hand over to the ports authority once it is created. It will not make sense if we get all this latest technology in the port and allow in the hands of people who do not master it,” he said.  The Kribi Deep seaport also has inbuilt cameras for surveillance and security round the clock. There is permanent patrol of forces of law and order.

Kribi is a deep seaport and Douala is a river port. As a river port, Douala needs dredging all the time which, experts say, is very costly. At the same time because of the shallow depth of 7 m, it cannot harbour ships with draft of close to 13 m. Meanwhile, “in Kribi, a ship of 13 m draft can anchor because we have a security distance of 1m and 1.5 m. Kribi has more depth than Douala. Depth around the jerry is 16 m which makes it capable of receiving all types of cargo ships in the world,” Peter Munongo Aboko said. The Channel in Douala is around 6-7 m but in Kribi, it is 15 m, making it the best in the central African sub region. Contrary to what is happening in Douala, Kribi has a maximum stay of containers in the port at 11 days. There is a logistic zone under creation which will host the containers after the 11 days must have expired. There is a warehouse where all the vehicles that will work in the port will be kept. For the autonomy of the port, there are three big generators to ensure continuity in case of load shading.